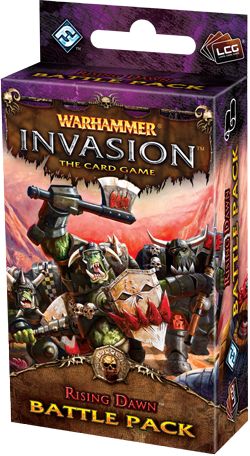 Rising Dawn introduces new cards that shake the balance of power between the races of the Old World and open varied new strategies, particularly for those units committed to exciting new quests. The High Elves find inspiration from a powerful legend, the Dwarfs gain strength from the fires of an ancient Grudge, Orc hordes rise in unending waves, Knights of the Empire ride to defend its borders, the Dark Elves gain a devious Commander to profit from their opponents suffering, and the Warriors of Chaos strew devastation in their wake.The Bloodquest Cycle introduces tremendous new incentives for players to send their units on quests. In the cycles announcement, we revealed a new quest, Heroic Task (Rising Dawn, 20) which allows you to quest for a tangible rewardany one card you choose to set aside from your deck. However, if that particular card is an Artefact support card, your reward is even greater, you may attach the card to a Hero or legend immediately upon the completion of the quest.