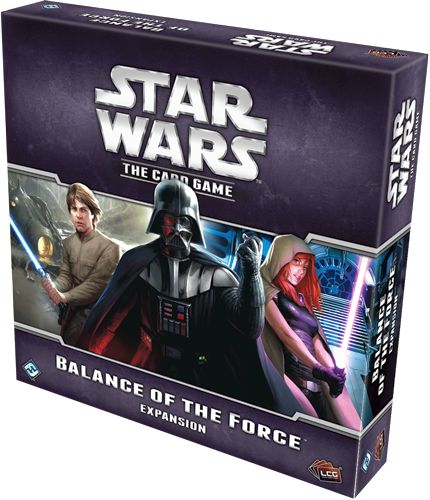 Yes, a Jedi's strength flows from the Force. But beware of the dark side. Anger, fear, aggression, the dark side of the Force are they. -Yoda, Star Wars: The Empire Strikes BackThe galactic civil war of Star Wars: The Card Game is exploding, and you can now enjoy the game in three separate formats: head-to-head, two-versus-two, and challenge decks. Balance of the Force, the second deluxe expansion for Star Wars: The Card Game, is now on sale at your local retailer and online through our webstore!This new expansion introduces the first multiplayer rules for Star Wars: The Card Game, inviting you to grab some friends for two-on-two matches or go up against one of two challenge decks covered in past previews  Jerjerrods Task or The Hunt for Skywalker. These unique, story-driven decks create narrative scenarios in which one player must face a team of two or three other player, introducing opportunities and challenges for new players as well as the more experienced.Even without playing multiplayer, theres plenty in Balance of the Force for the games head-to-head contests. Six powerful new objective sets (one copy each of six objective sets) are included in addition to the challenge decks, as we saw in our last preview. No matter what options you use from Balance of the Force, the struggle between the light side and the dark side of the Force has never been more intense!