The many villains from the Multiverse have been bested by the Freedom Five or Dark Watch or the Prime Wardens or even heroes not from a particular team. Many of those villains are prideful and would not deign to work with others, as their goals would not align. However, some of them have seen the value of cooperating towards a common goal. And those have joined forces, even at cross purposes, to defeat the heroes who have harried them for so long.Some of these villains, such as Plague Rat or Biomancer, are more hesitant to work with other villains. Whereas others, such as Citizens Hammer & Anvil or Sergeant Steel, are more than happy to join forces with other like-minded combatants.Villains of the Multiverse is a mega-expansion for Sentinels of the Multiverse. It uses the villain team gameplay style introduced in Sentinels of the Multiverse: Vengeance to group villains together as a team fighting against the hero team. Villains of the Multiverse includes ten villains, which can be faced in any configuration, as well as four exciting new environments. 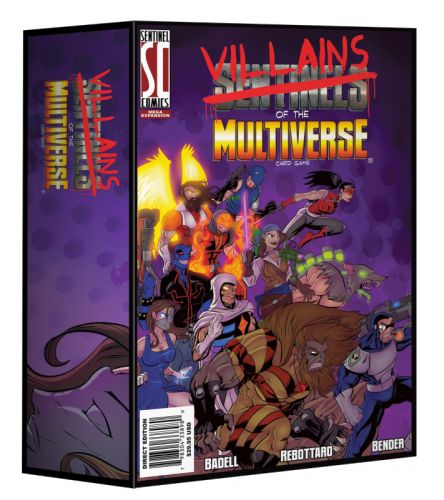