In Rail Pass, 2-6 players work together to deliver as many goods as possible in ten minutes, with goods being represented by cubes and with the color of the cubes indicating their destination city. During set-up and before the clock starts, players scramble the goods and arrange them in a row across the top of the city boards. The player controlling that city can see all the cubes that must be delivered but can pull goods only from the right or left end of the row when loading them on the trains. Once the clock starts, all players take their actions simultaneously, in any order, and repeating any action as often as necessary. To transport cargo, a cube must first be loaded onto a short or long train piece that is at rest in the player's home city train yard. No train can move without a crew peg, and no crew peg may travel beyond the adjacent city. In order to transport cargo to more distant cities, a train needs to stop and have the crew peg swapped or cargo exchanged between trains. While all this is going on, players must avoid dropping or spilling cubes when picking up or handing the train to another player. Additional terrain components such as tunnels and bridges can be placed between cities and act as additional obstacles to negotiate. When time runs out, calculate the score by multiplying the two lowest counts of cubes delivered to a city. Points are subtracted for dropped cubes, or cubes delivered to the wrong city and also for crew pegs that traveled beyond their adjacent cities. With six players, each takes one of the six main cities, each producing goods which are delivered to the other five locations. In some scenarios with fewer players, each player may control multiple cities. 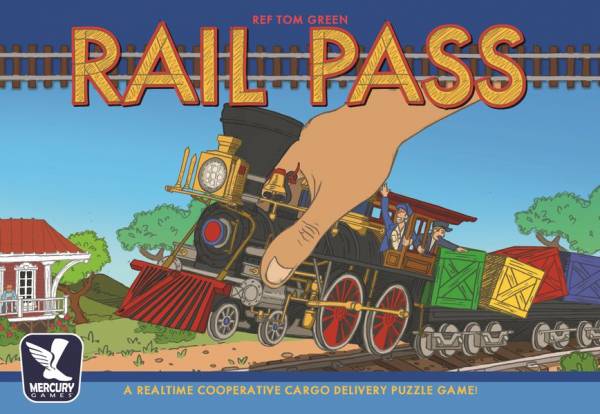