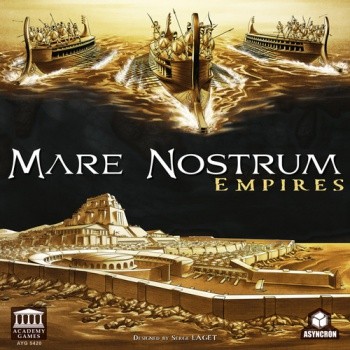 The ancient Romans called the Mediterranean Sea mare nostrum", which is Latin for "our sea".Mare Nostrum is an empire-building game in which 3-5 players lead their individual ancient empires to dominion of Mare Nostrum. You grow the fame and glory of your empire by expanding your influence into new Provinces, then extending your Trade Caravans, building Markets, and founding new Cities and Temples. You can recruit Heroes and create Wonders to help your cause. But beware of your "friends" because they may look upon your gains with envy and greed...Mare Nostrum is a re-introduction by Academy Games and Asyncron of the original 2003 release with updated rules, counters, and map board. This edition includes many new components and multiple new ways to win!In more detail, you choose an empire to lead, which begins with three Provinces. You can lead with Caesar of Rome and its powerful Legions, or with Pericles, the prominent Greek statesman and orator, with the great Babylonian lawgiver and healer King Hammurabi, or with Queen Cleopatra of Egypt, whose engineers led in the development of grain storage and irrigation, or with Hannibal, leader of the Carthaginia, whose merchants thrived on trade and commerce. Now you decide how you will grow your empire. You can do this by:Expanding your Trade and creating Wonders.Concentrating on Culture and building the great Pyramids.Developing a strong and powerful Military to occupy the Provinces of other empires, orExerting Political Leadership by claiming the titles of Trade Leader, Cultural Leader, and Military Leader.Mare Nostrum - Empires' differs from the original Mare Nostrum in several key ways, with new improvements that add to the experience of the game. Some significant changes improve the pacing of the game, and others represent subtle changes that improve the balance and quality of play.'Victory Conditions'Mare Nostrum - Empires add two more victory conditions, beyond the original building of the Great Pyramids and collecting 5 Heroes and/or Wonders. Now victory can be achieved by expanding your empire and controlling 4 Capital and/or Legendary Cities, or by holding the titles of Trade, Culture and Military Leader. Players can now follow completely different strategies in their empire expansions!'Resources & Game Components'Tax and Good Resources in Mare Nostrum - Empires are represented by thick counters.A 13th trade resource has been added to the game.The number of buildings has been increased from 58 to 72.Heroes and Wonders are now represented by high quality tiles rather than cards. These Heroes and Wonders add new capabilities to game play and also influence the Leadership tracks.The map board is now fully adaptable for 3-5 players. We have unlocked the Leadership mapboard, which adds a LOT to game play.We have also unlocked the 2-player rules, which are fully developed and ready to be printed! And, we have added the Barbarians, which make the 2 player game even more difficult to play. (Evil laugh in the background :)'Trade Phase'Trading has been revamped and features an all new system.The Trade Leader is limited to 3 choices for Resource exchange: He has three Exchange tokens marked with '0 or 5', '1 or 2', and '3 or 4', that dictate the number of resources each player must offer for trade. All three Exchange tokens must be played before they may be reused. This adds a lot of tactics and strategy.Legendary Cities have been added to the game, which produce one hidden resource known only to the controller of the city. This is a subtle change that allows players to keep their opponents guessing as to what resources they have gathered.'Build Phase'Recruitment and Building of Heroes and Wonders has been revamped to be a gradient cost starting at 6 Resources, increasing by 1 Resource with each purchase. The 5th Heroes or Wonder has a cost of 10. This allows each player to reasonably recruit or build at least 2-3 Heroes or Wonders over the course of the game, adding depth to each strategy.Another streamlining change allows players to build in a Province on the same turn in which they have spread Influence into the Province.'Battle Phase'Mare Nostrum - Empires now includes Legion and Trireme Battle Dice that differ from each other. Legion Battle Dice have a range of 3-6 with faces 3, 3, 4, 4, 5, 6 and Trireme Sea Battle Dice have a range of 2-5 with faces 2, 3, 3, 4, 4, 5. This means that battles have less randomness and more strategy involved, as well as limiting the ability to fully blockage a player with a few naval units.Fortresses also have the ability to absorb one hit during a battle, expanding their overall usefulness.These changes balance battles by removing some of the randomness and improving the overall quality of the experience."