The first settlers of mars are arriving soon, but the colony is not ready yet! You are the robots that are trying to build the colony before the settlers arrive. The goal in Magic Maze on Mars is to build domeswhere the settlers can live, then to guide them to their domes when they arrive. When time runs out, they are out of oxygen. To begin, place the starting tile in the middle of the table. Deal out the appropriate action tiles and shuffle the four A tiles in a pile face down. Creating resources: A player with blue on their action tile can always create blue resources at the blue factory so long as a resource is not already there. The player simply takes a blue resource from the bank and places it on the resource station next to the factory. The resources of other colors are built on the factories of their color, with these factories becoming available when you build new tiles. Moving resources: Players can move resources along the roads with a color that they have on their action tile. A player might have an action tile that shows red and orange, so they can move resources along red and orange roads. You move resources from one "stationto another, but each station can hold only one resource, and resources cannot move through a station that holds another resource. Note: When moving resources, you must physically move the resource all the way, so the other players can see what is happening. Even if there is a long stretch of road that you are able to move on, you cannot move the resource directly. Building new tiles: To do this, you need to have a resource of the station's color on the station, e.g., a blue resource on a blue station. Once the resource is there, a player with this color on their action tile can remove the resource and place the top tile face up at the position. Place the tile with the small arrow pointing from where it was build. Watching the time: As in Magic Maze, players have a time limit in Magic Maze on Mars. To flip the sand timer, you must move any resource onto a timer space. Return the resource to the bank and place a timer token on the timer space to show that it cannot be used again. By doing this, you send a signal to the settlers that the colony is not ready yet, they will then orbit Mars once more before landing, but they can't do this indefinitely. Building domes: Some tiles have spaces available for domes. In order to build a dome, you need to place the depicted resources on the dome spot, e.g., green, yellow, and red. When all the necessary resources are placed on the dome, any player can put all the resources back in the bank and place a dome (taken from the communication board). When you have built all the domes, the settlers arrive. Place all the settlers on the rocket. Then move the settlers just like you move resources. You have won as soon as one settler inhabits each dome. There cannot be more than one settler on each station, and they cannot walk through resources. Once the settlers arrive, you can no longer flip the sand timer! (It does not help to send them messages about orbiting Mars since they are already here.) If time runs out, you have lost." 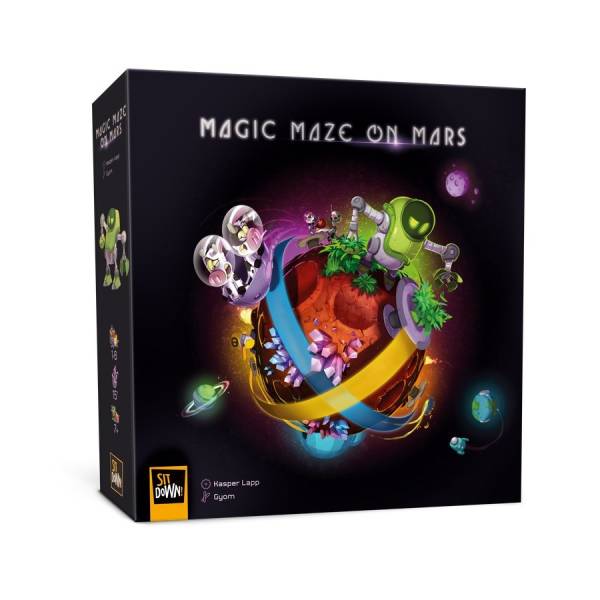