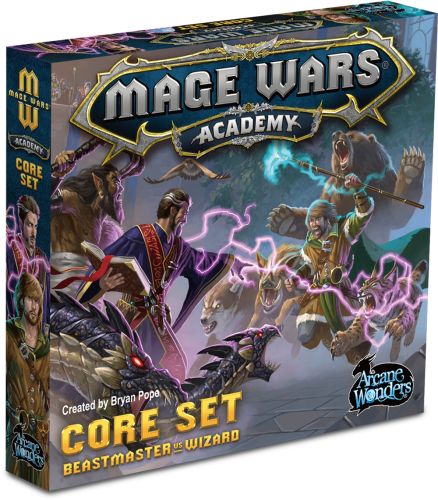 Welcome to Mage Wars Academy! You have reached the climax of you studies as a Mage in training and now stand ready to face off against other students, those of an entirely different school and ideology! How will your battles turn out? Your actions will determine who is the victor and who tastes bitter defeat!Mage Wars Academy introduces an entirely new, stand lone game to the exciting Mage Wars universe of Etheria.Similar to Mage Wars Arena, players will take on the role of dueling Mages, attempting to use their cunning, wit, and tactics to defeat their opponent by reducing their life to zero. Completely different from Arena though, Academy is played without a board, in a much faster time (matches range from 20-30 minutes) and yet still offers strategic choices, tactical combat, and exciting game play!Setting up a game of Mage Wars Academy is very quick and simple.Players will find a place to play that allows them to sit across from each other, take their Mages out of their spellbooks, along with their ability cards, then use the provided spindown status tracker to set their starting life and mana.Players roll for innitiative, and the match begins.While many Mage Wars fans will be familiar with playing over a grand arena, Academy takes place in a single zone, with no movement and no escape!