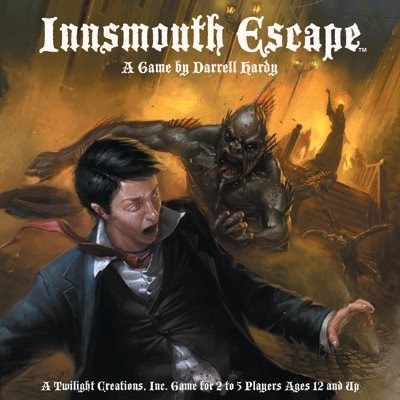 In the summer of 1926, a Miskatonic University field trip got lost while touring through New England, and found itself in the shadowy, monster-infested town of Innsmouth. The locals didnt take kindly to the outsiders poking around and, under cover of night, kidnapped them. The Miskatonic students and faculty are now separated from each other and being held captive by the fiendish, fish-like Deep Ones, who mean to sacrifice them to their watery god Dagon.What the Deep Ones dont know, however, is that one of the students has escaped, and hes not leaving without his friends...In the Innsmouth Escape game, one of the players takes on the role of the escaped student. He is the Human player, and he is trying to rescue his friends and escape Innsmouth. By playing movement cards, he moves his pawn around the board to visit various locations, fights any Deep Ones there, then searches those locations for his friends and equipment to help in their escape.The other players play groups of Deep Ones. They are trying to prevent the Human player from escaping. The Deep One players take turns moving their pawns around the board trying to trap the Human. Certain locations on the board also allow them to draw cards, spawn additional Deep Ones, or even summon a terrible Shoggoth.