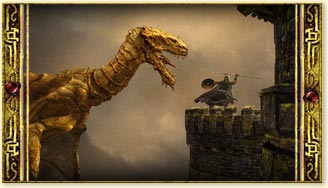 Night after night, the murderous trollmonster Grendel stalks the Kingdom of Heorot. Every morning when dawn breaks, the Scyldings gather to find out whom the terrible beast has borne away in the night. The call for a hero goes outand the mighty Beowulf answers.Beowulf: The Movie Board Game tells the tale of the legendary hero Beowulfs valor and temptation as he faces the enemies of the Kingdom of Heorot. In each of three acts, players guide Beowulf and his loyal Thanes into battle against the monster Grendel, Grendels treacherous mother, and the savage golden dragon who threatens to destroy everything Beowulf holds dear.Two to four players compete to tell the most heroic possible tale of Beowulf, controlling Beowulf himself, his loyal thanes, and the various boons and perils that make the saga the most gripping tale of heroism ever told.