The next partnership between Alderac Entertainment Group and Dust Games brings to gamers Arcana. Arcana, an exciting new card game set in the mythical city of Cadwallon, pits you against up to three opponents as you vie for the most power for your Guild.Will the Guild of Blades control the city? The Guild of Thieves? Its up to you as you fight for the best agents to exert your influence.As the game is played, various stacks of Stake cards are revealed. Using the cards in your hand from your Main Deck, you will play agents to the various Stake cards, and you will use other cards to augment your agents. The player whose agent wins the Stake will claim it, placing it in his Resource Deck. Any card from your main deck that has been played also goes to the resource deck. When the main deck runs out, you reshuffle your resource deck into a new main deck. The more powerful the Stake card you win, the better it will make your deck as the game progresses. However, should you win a stake for a card that does not directly help your strategies, you can put the card under your Guild card, and still score at the end though not have to reshuffle that card into your deck, maintaining focus. Every card has a point value and at the end of the game the total point value of all the cards in your possession determines the winner.Each Stake is determined by various factors, such as military power, political power, money, etc. Each Guild has different abilities, such as the Guild of Blades always winning ties on Stakes determined by military power.Along with the Stakes, each player is given a number of Objective cards at the beginning of the game. Completing these objectives, such as Control three Automaton Stakes will earn the player additional points.By customizing your deck as you play and with four different Guilds to choose from, the replay value of Arcana is nearly limitless. 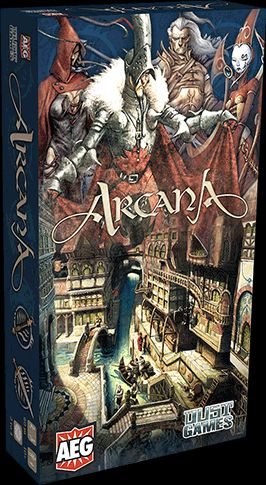